Moving to a new worship space made recording my sermons a bit challenging... but I think I have it figured out. So here is my sermon from Sunday Sep. 20, "God Loves {insert_name} More".

The Kim Davis issue seems to be dying down. Kim is out of jail. The same-sex couple has their wedding license. The media is slowly pulling away from the story. So I guess it's time for me to weigh in.

Sure, I've been weighing in on friends' meme posts who don't seem to be getting things technically correct (and getting little jabs here and there since they just thought something was funny). I am not a quick thinker and sometimes I fall behind in an instant media world. But I have thought a bit about the situation... a government official refusing to do something that is part of her job because of religious commitments... and I am somewhat surprised that I have not seen anything regarding Naaman, the gentile general who suffered from leprosy.

Why Naaman? It has less to do with Naaman being healed than his response following the healing. Naaman confesses the God of Elisha to be his only God.

So he went down and immersed himself seven times in the Jordan, according to the word of the man of God; his flesh was restored like the flesh of a young boy, and he was clean.  Then he returned to the man of God, he and all his company; he came and stood before him and said, "Now I know that there is no God in all the earth except in Israel; please accept a present from your servant."  But he said, "As the LORD lives, whom I serve, I will accept nothing!" He urged him to accept, but he refused.  (2Kings 5:14-16 NRSV)

The Sacraments and Sacra-Mentality

A friend of mine, Keith Anderson, published a blog post today reflecting on some of the response following Rachel Held Evans' new book and her entrance into the Episcopal church. Much has been made that she, a former evangelical, has found value in the sacraments (for her and some in the Episcopal church, they number seven: Baptism, Eucharist, Confirmation, Confession, Ordination, Marriage, Extreme Unction (anointing and laying on hands for the sick),  ... for others they number only two, Baptism and Eucharist... but that is an old debate that need not be rehashed here.) Keith rightly points out that many mainline churches are "breathing deep sighs of relief, patting themselves on the back, and smiling in self-congratulation."

Keith criticizes those who think if they just keep doing what they are doing, the young adults disaffected by the rock music, or coffee bars, or light shows, or anything else that tries to make church "cool" will find their way back to their pews with the liturgical tradition that has remained largely unchanged for decades. Keith writes:


Judging from the comments I’ve seen in the days since Held Evans’s article was posted, I’m afraid that her assertion has had the unintended consequence of reinforcing the tendency toward inertia exhibited by some Mainline ministry leaders. “See, we’re fine. We don’t need to change,” I can hear them saying. “We can keep doing what we’re doing. Let’s put on some coffee, order some new communion wafers, and wait for the young evangelicals to come pouring in.”
Good luck with that.
Such interpretations of Held Evans’s post are problematic because they reinforce our maddening fixation on matters of worship, to the detriment of extending ministry beyond our church buildings, deepening faith formation, serving the poor, and helping our neighbors.

The End is Near! Final Judgment is Upon Us!

Not THAT final judgment... those on college campuses know what I mean.

Here is a message I shared with my students this week in the weekly update for the campus ministry. I share it here as well for everyone feeling burdened by exams, papers, grades and the like...

-----
Finals are upon us... a time of focus and exams and stress and work and stress and... yeah. Finals are important to be sure. There is some need to gauge how well (or not) we have comprehended the material set before us over the course of the semester. Sometimes the exams and papers seem unfair. Sometimes they are ridiculously easy. And we prepare, hopefully diligently. We do our best and place ourselves at the mercy of the faculty and others grading us.

It is important to remember though that our ultimate worth is not determined by our GPA, or the grades we earn. We make our lives more difficult when we allow ourselves to become immersed in the messages that "EVERYTHING DEPENDS ON THIS GRADE!" Our grades are necessary and can help us reflect on our courses of study and the direction for our lives.

But at the end of the day, they are partial pictures of our lives and our identity as human beings. We are loved and deemed worthy by a God who came and dwelt with us as one of us. God's love for us shows us our worth and our value.

You are a precious child of God. period. Please never forget that... and if you think you are forgetting that during this time of judgment... call me. email me. text me. Let me remind you.

Many of the books I read, include mythical or fantastical creatures. Orcs, ents, elves, dwarfs, Martians, Vulcans, and the like. Most people likely believe these creatures are imaginary. Possibly people believe they exist as cryptids, a creature for which there is mere suggestion and little proof of existence... like Sasquatch or the Loch Ness Monster or the Pittsburgh Tunnel Monster, which feeds upon faster moving traffic which explains why everyone in the 'Burgh slows down immediately before entering one of our tunnels making the traffic jam cascade behind them.

In a recent spewing, Phil Robertson opined on an imaginary violent encounter with an atheist in which the atheist's wife and daughter were raped and  murdered, followed by the castration of the atheist. Throughout this foul reflection, Robertson follows the old motif that the atheist cannot oppose such activity because he, being an atheist, has no basis for any moral judgment. The perpetrators of the evil against the atheist say in the midst of their attack, "But you’re the one who says there is no God, there’s no right, there’s no wrong, so we’re just having fun."

The View From Here: My Daughter and My Phone During Worship

A couple of weeks ago, I brought my children with me to worship. My wife was playing organ at one church. I was leading worship at Heinz Chapel for the campus ministry. How to get the kids to the zoo for the Zoo Boo that afternoon? Yes, come with me, because I was closer. No problem, although being a campus ministry service, there is no nursery available for young children, like my four-year old daughter.

So I was leading worship, but not preaching. That task fell to my Episcopalian counterpart that morning. My daughter and eight-year old son sat with me in the front pew. My oldest child, the eleven-year old boy, found a seat several rows back, behind a pillar where he could remain apart from us. And of course my daughter got antsy. So like many parents, I handed her my phone. She played a few games, but ultimately went on to her favorite activity, taking pictures. I did not count how many pictures she took, but it was quite a few. A couple of days later, I sat there deleting them. For about half an hour. At some point during the deletion marathon, I paused and realized that these photos, bad as they were, were recording the view from my daughter's perspective. Given her perch, what exactly was there to grab her attention. It appears that several things piqued her curiosity... some of them were actually service-related... but how long could anyone expect to sit still if there wasn't something to grab... and hold... his or her attention. 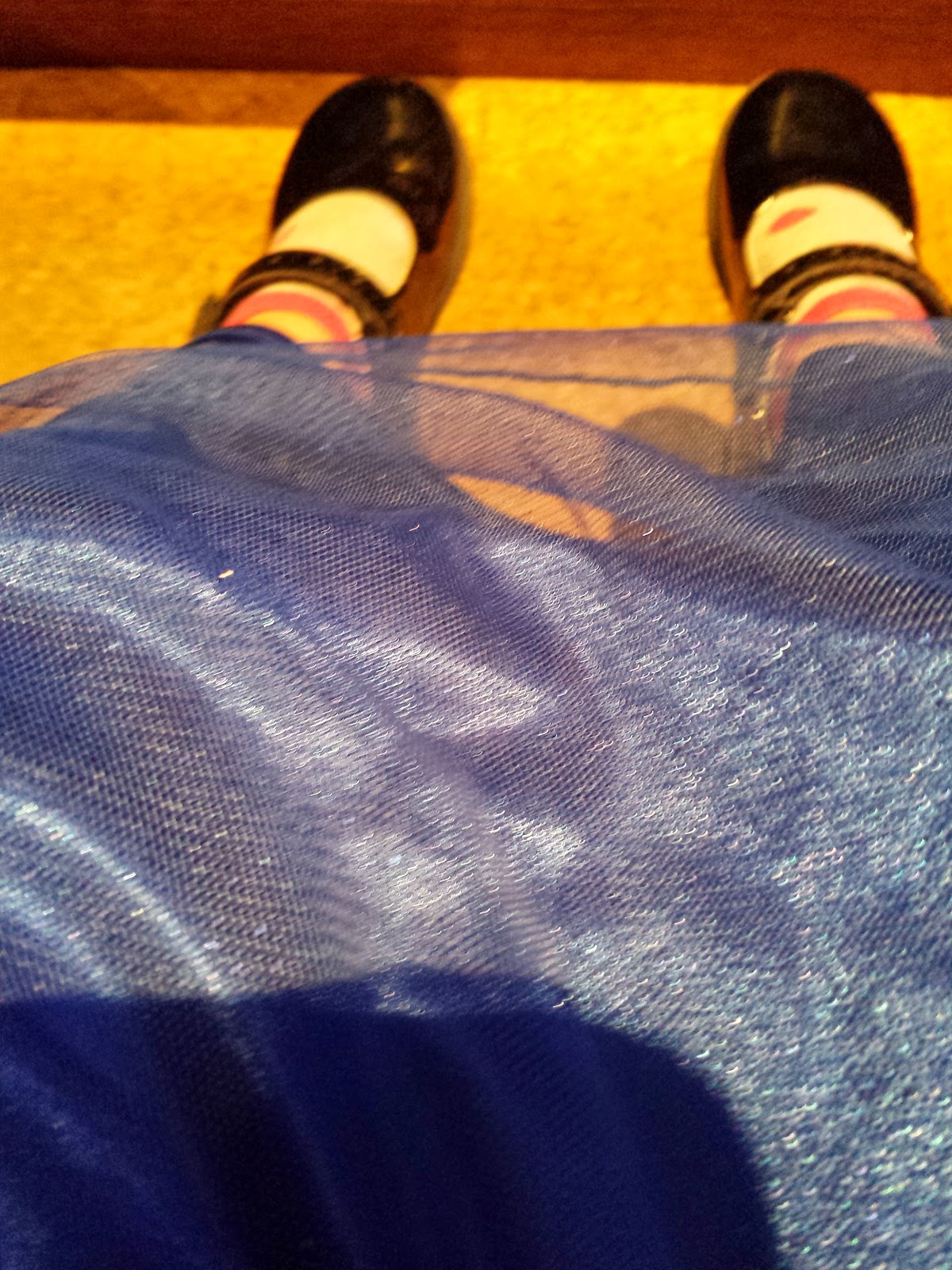 Countless shots of her feet and/or the floor 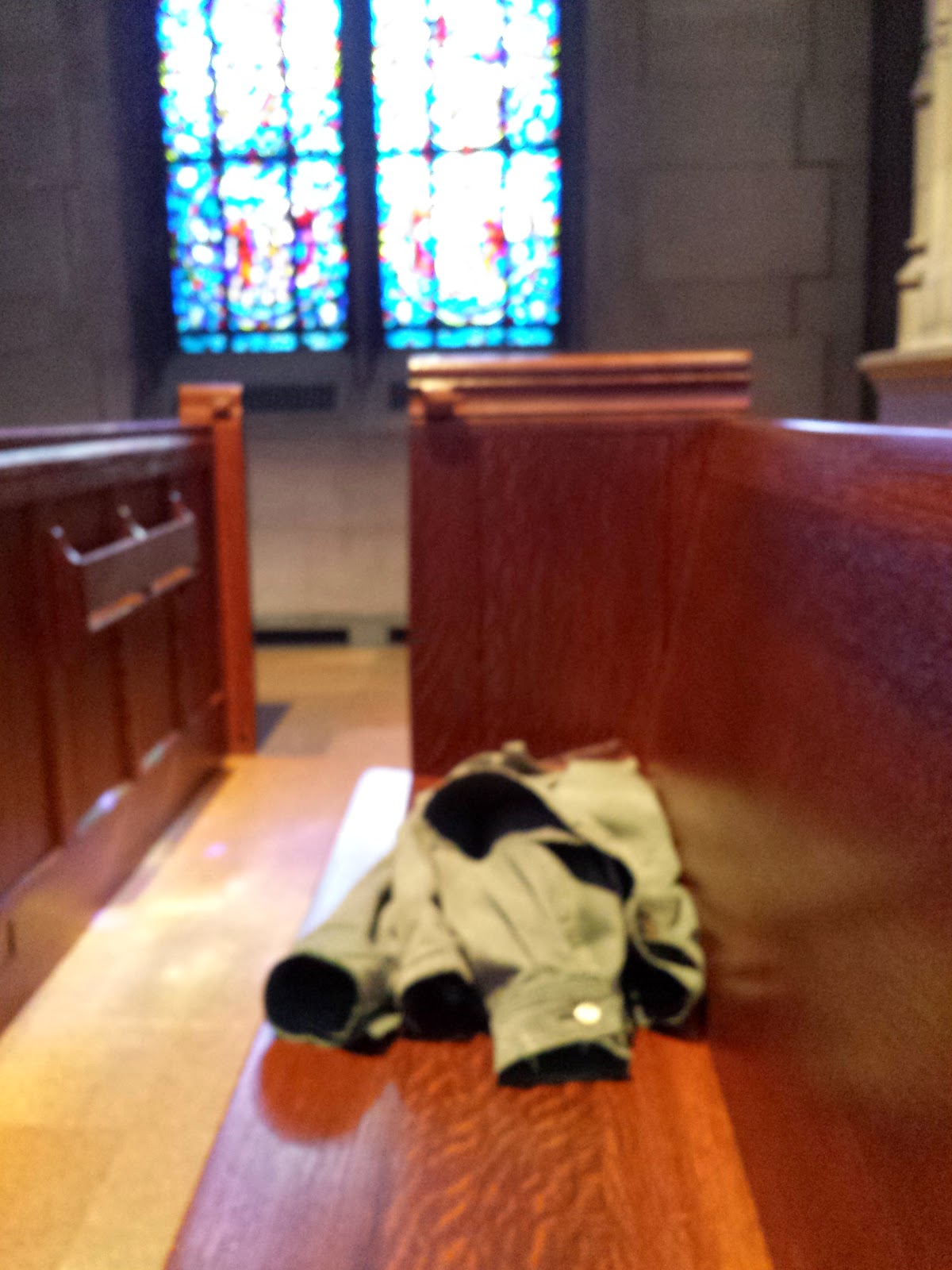 The pew, my jacket and the stained glass

Her foot again... but somehow turned it into an animated gif. How did she do that? 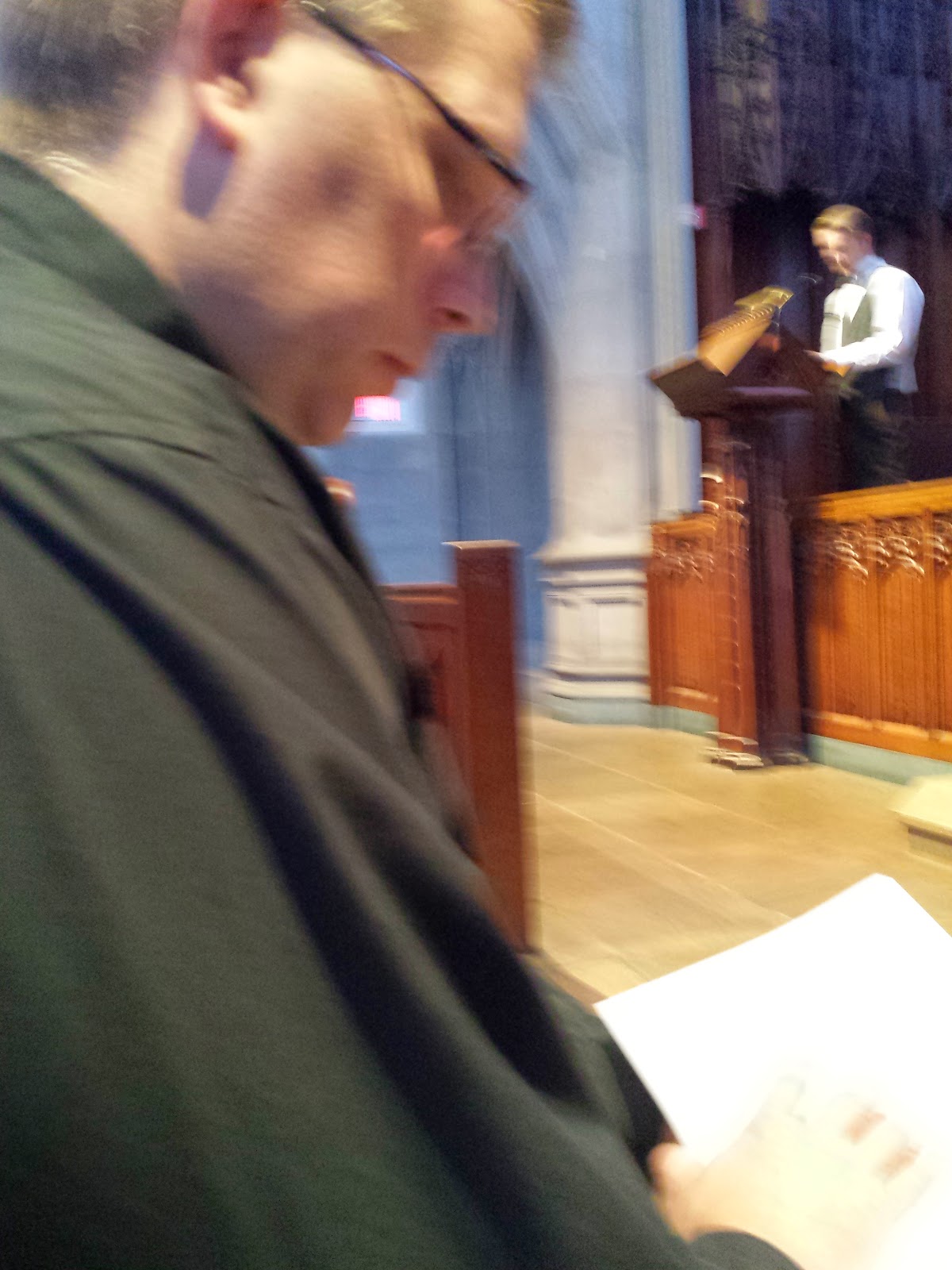 Me reading along with the lector 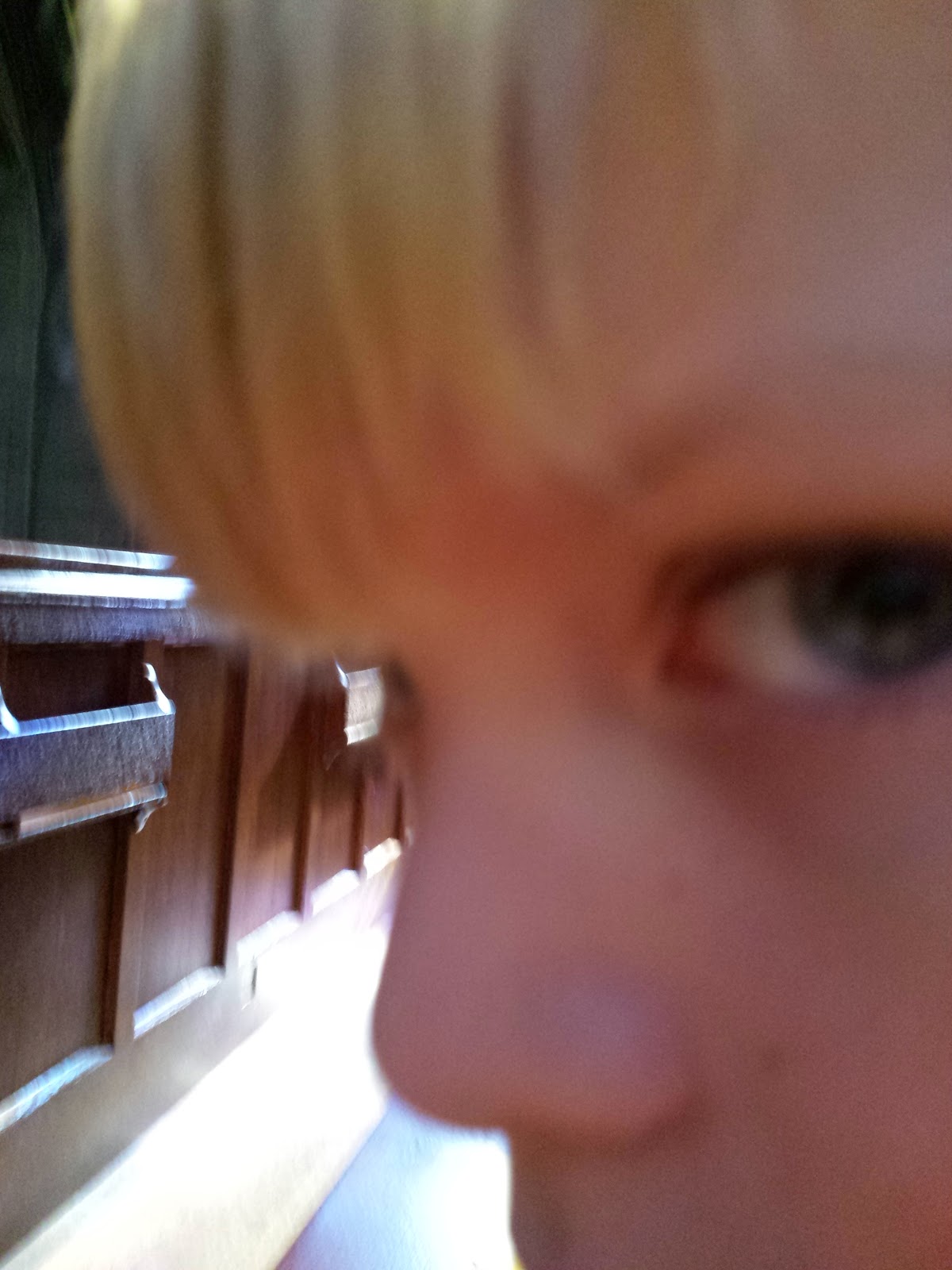 Brother... who appears put off by the close up 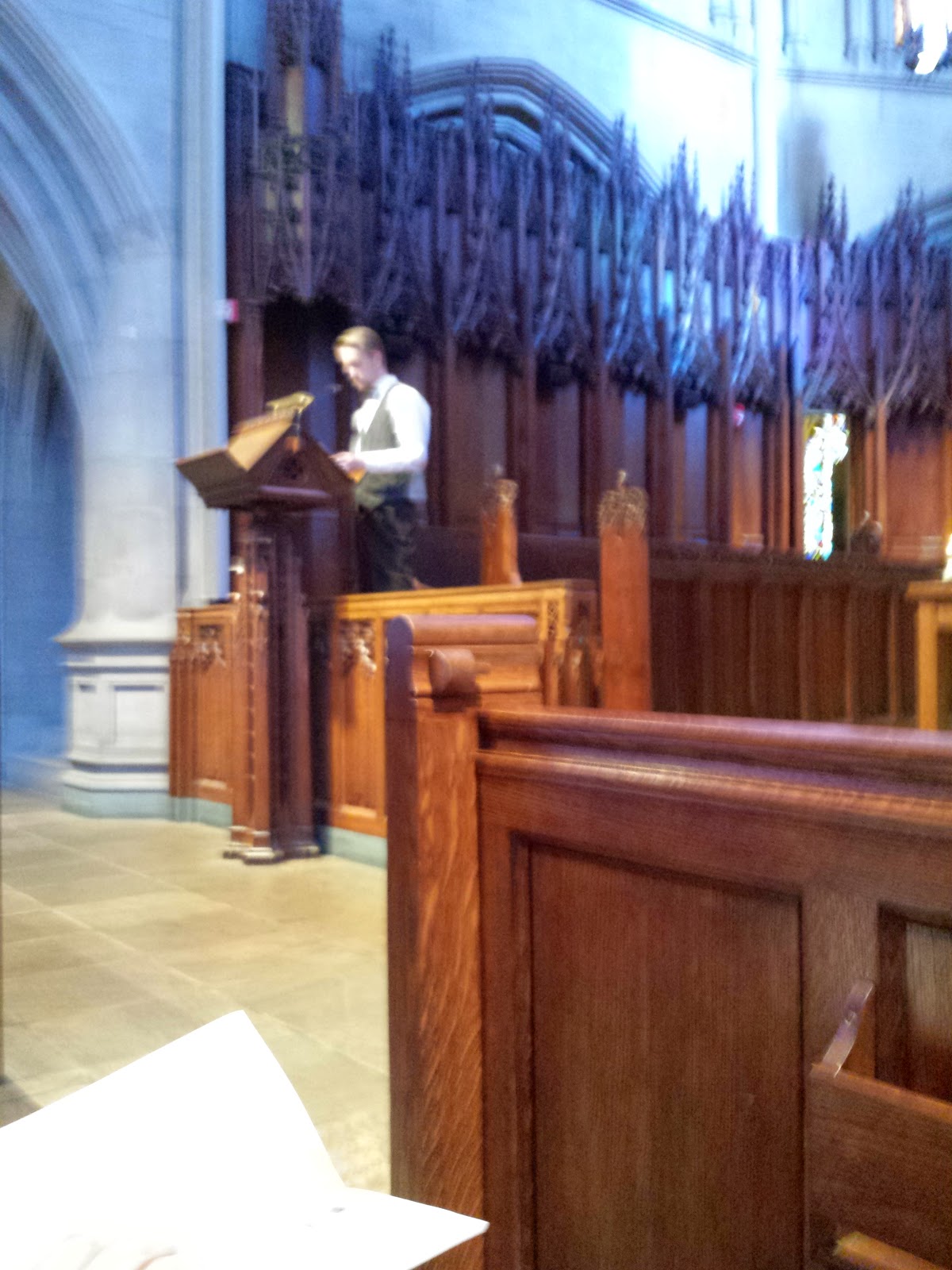 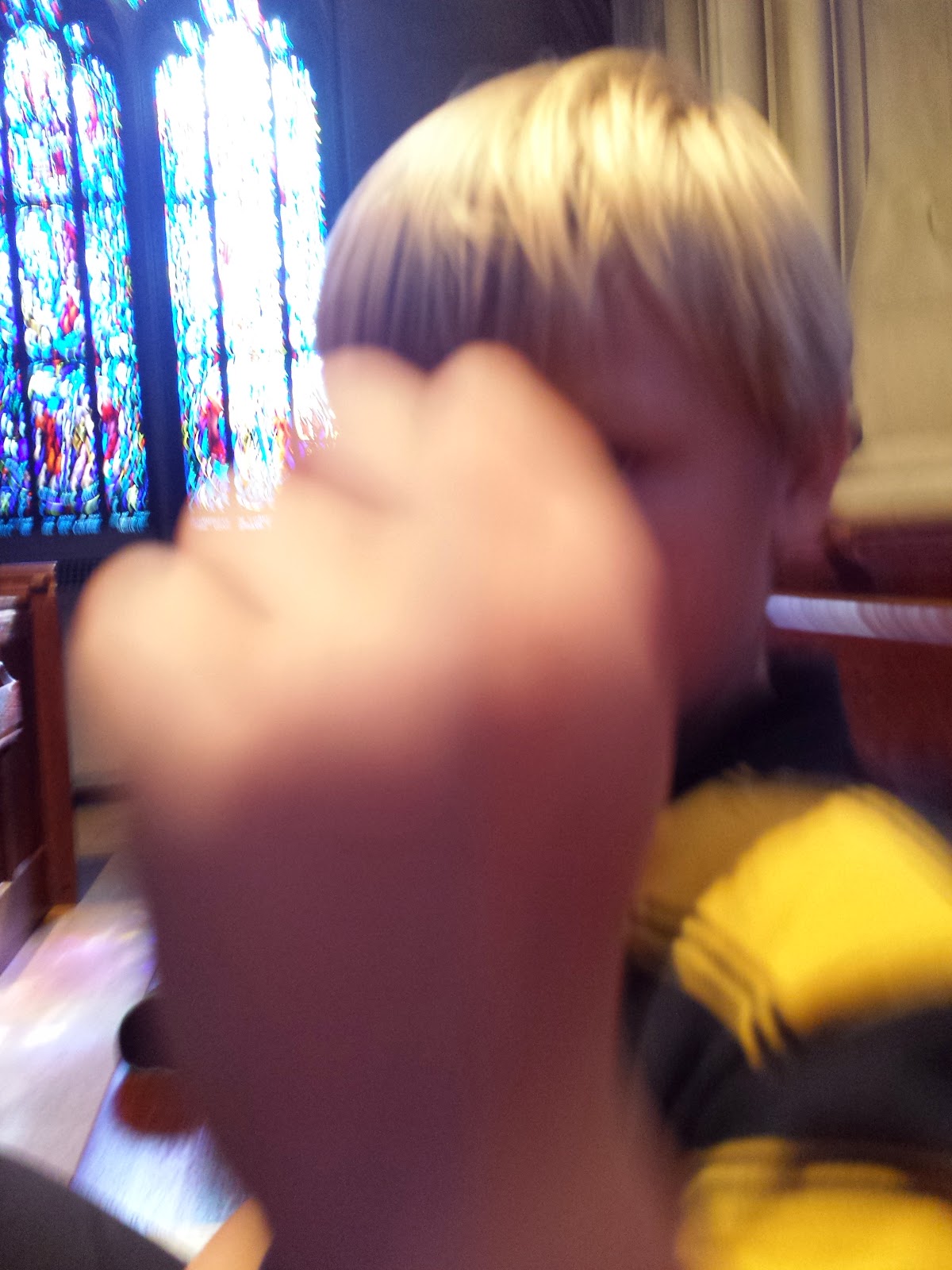 Brother would not do well with paparazzi 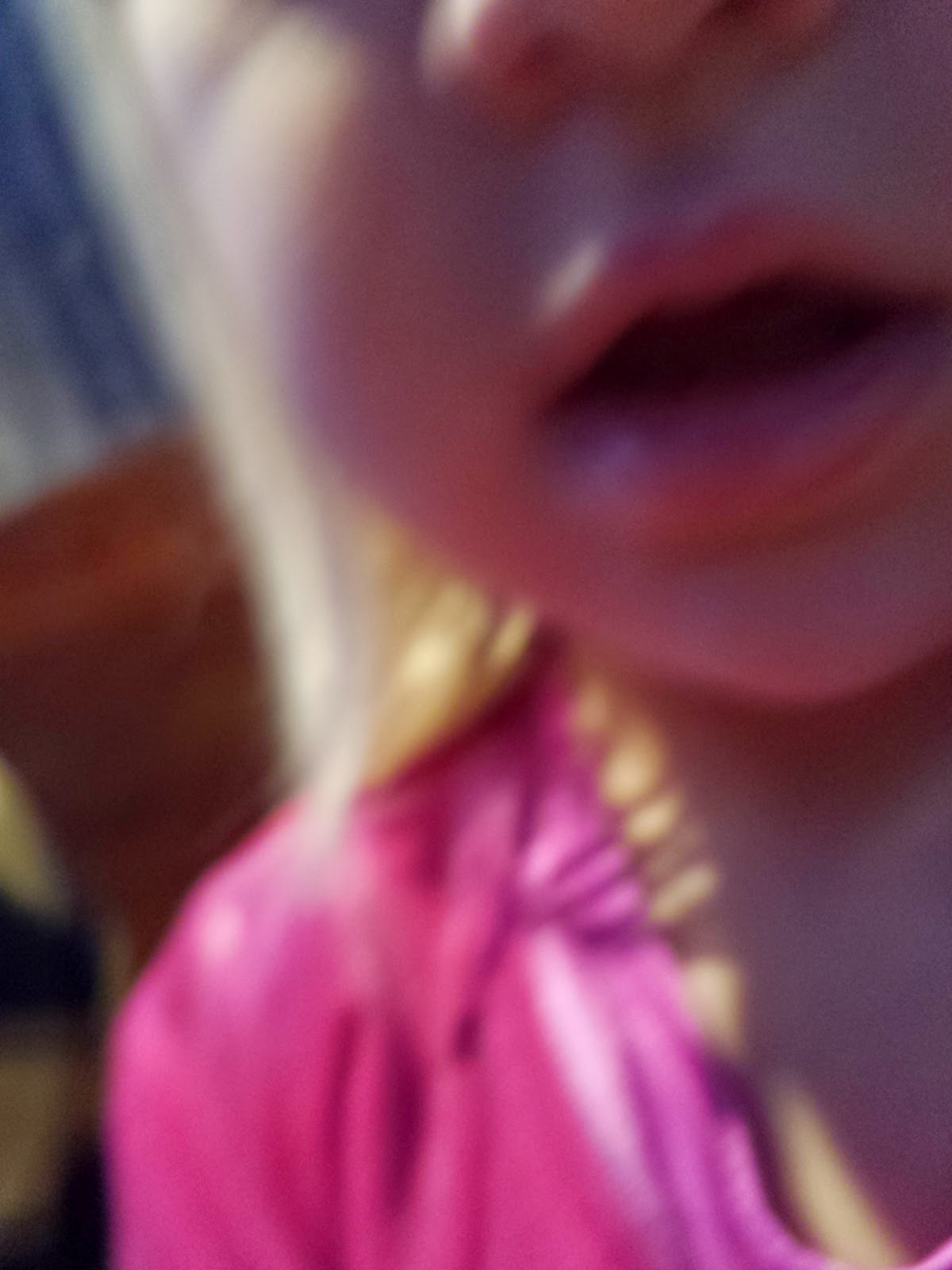 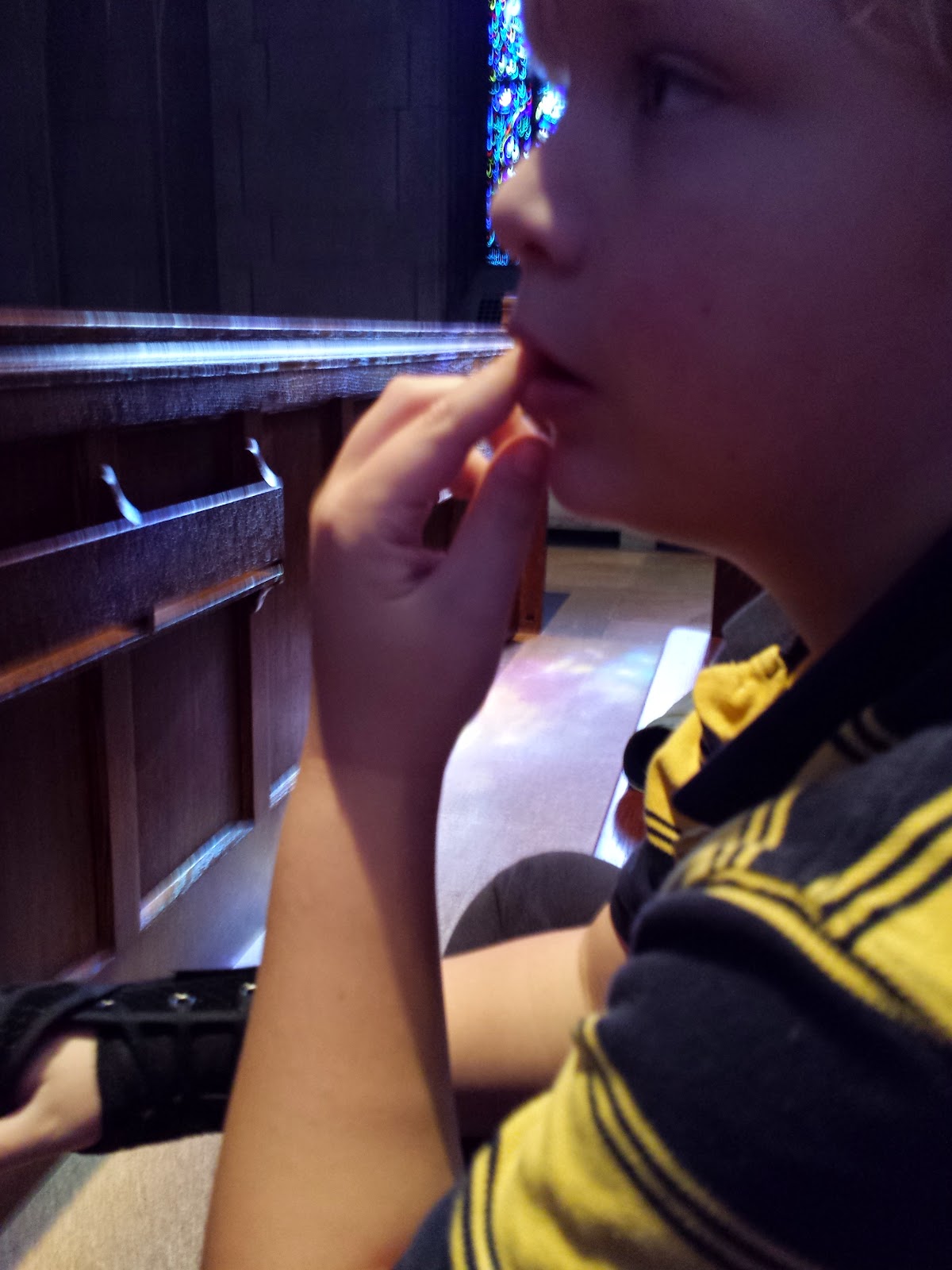 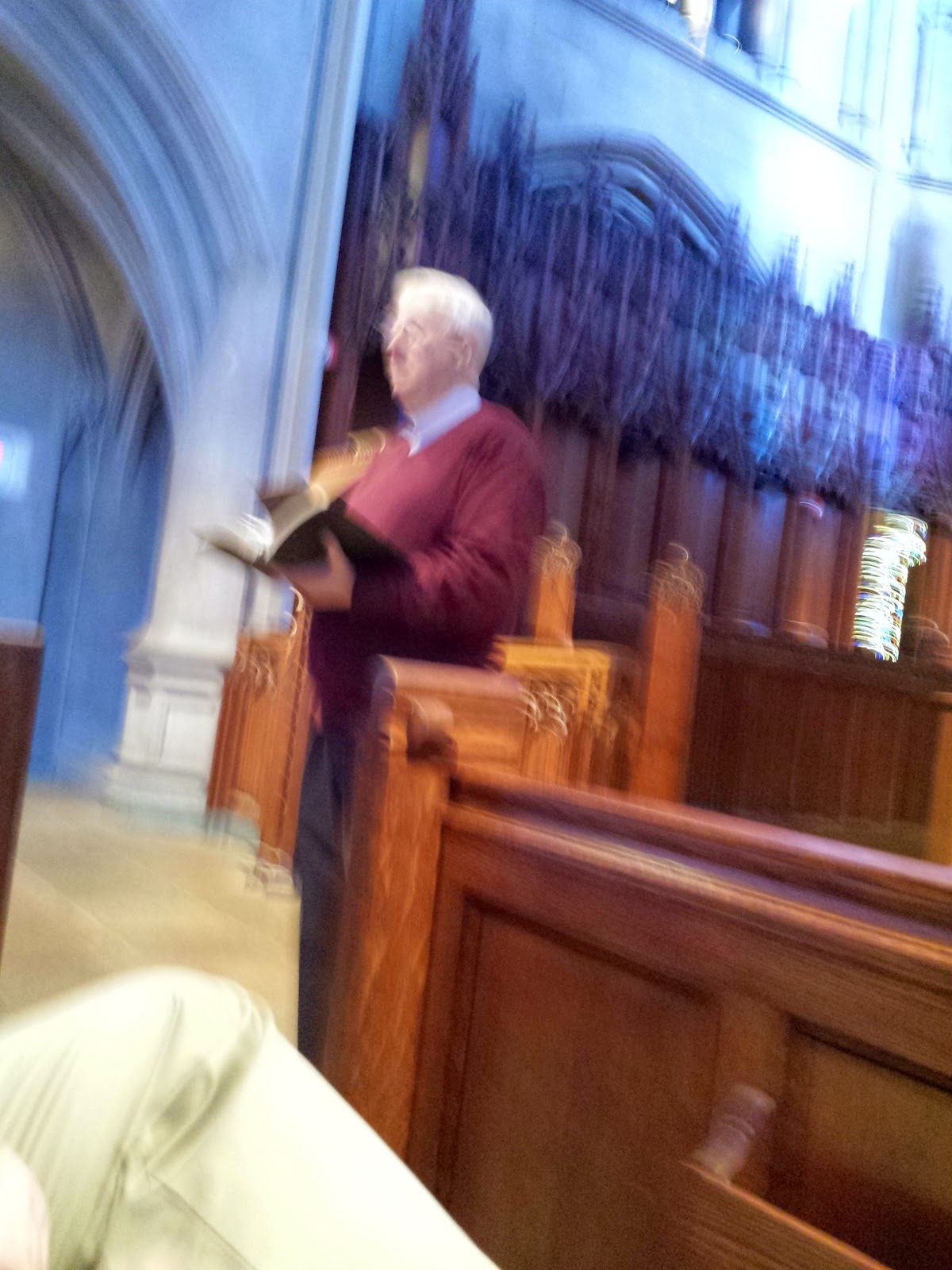 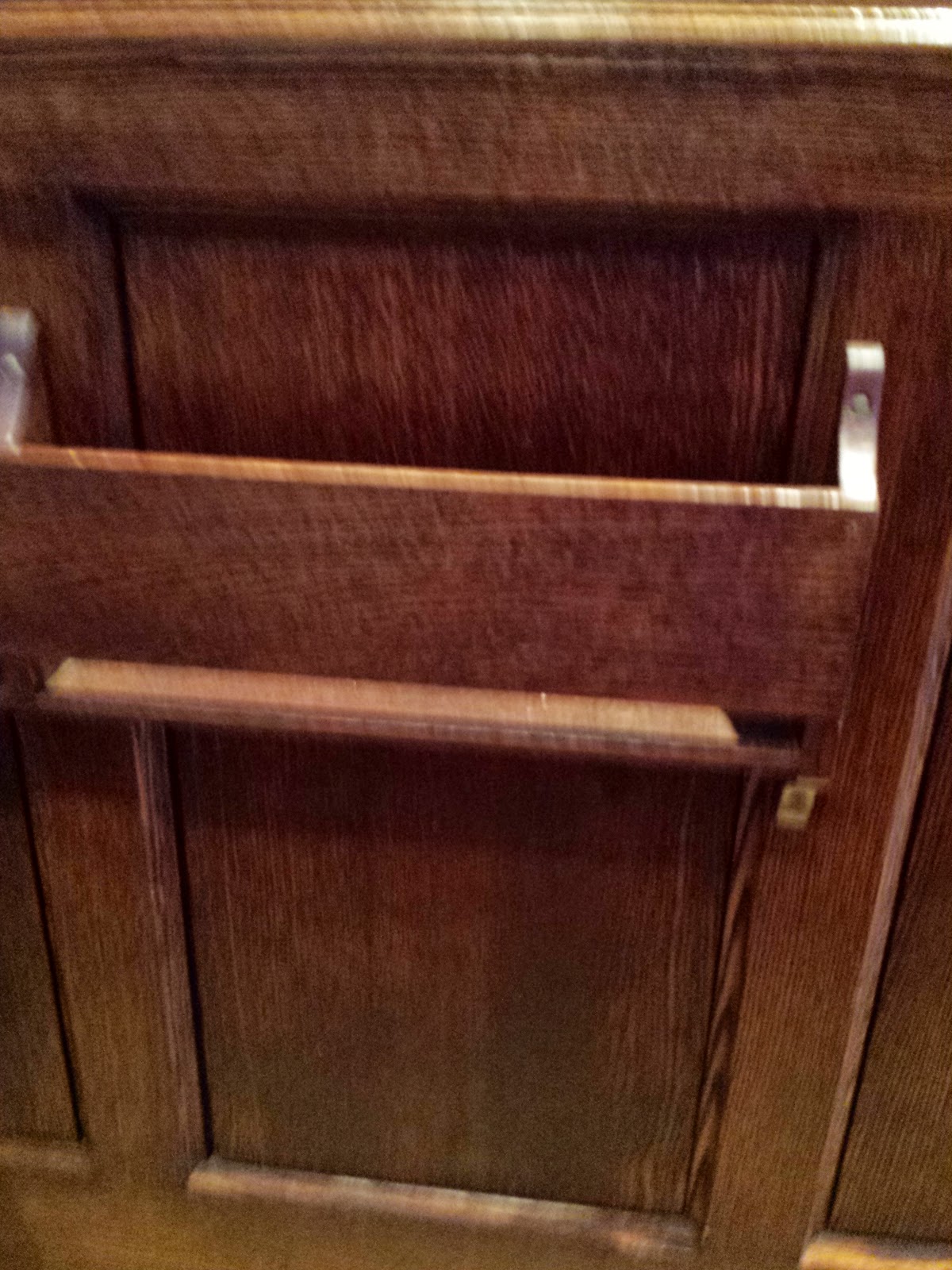 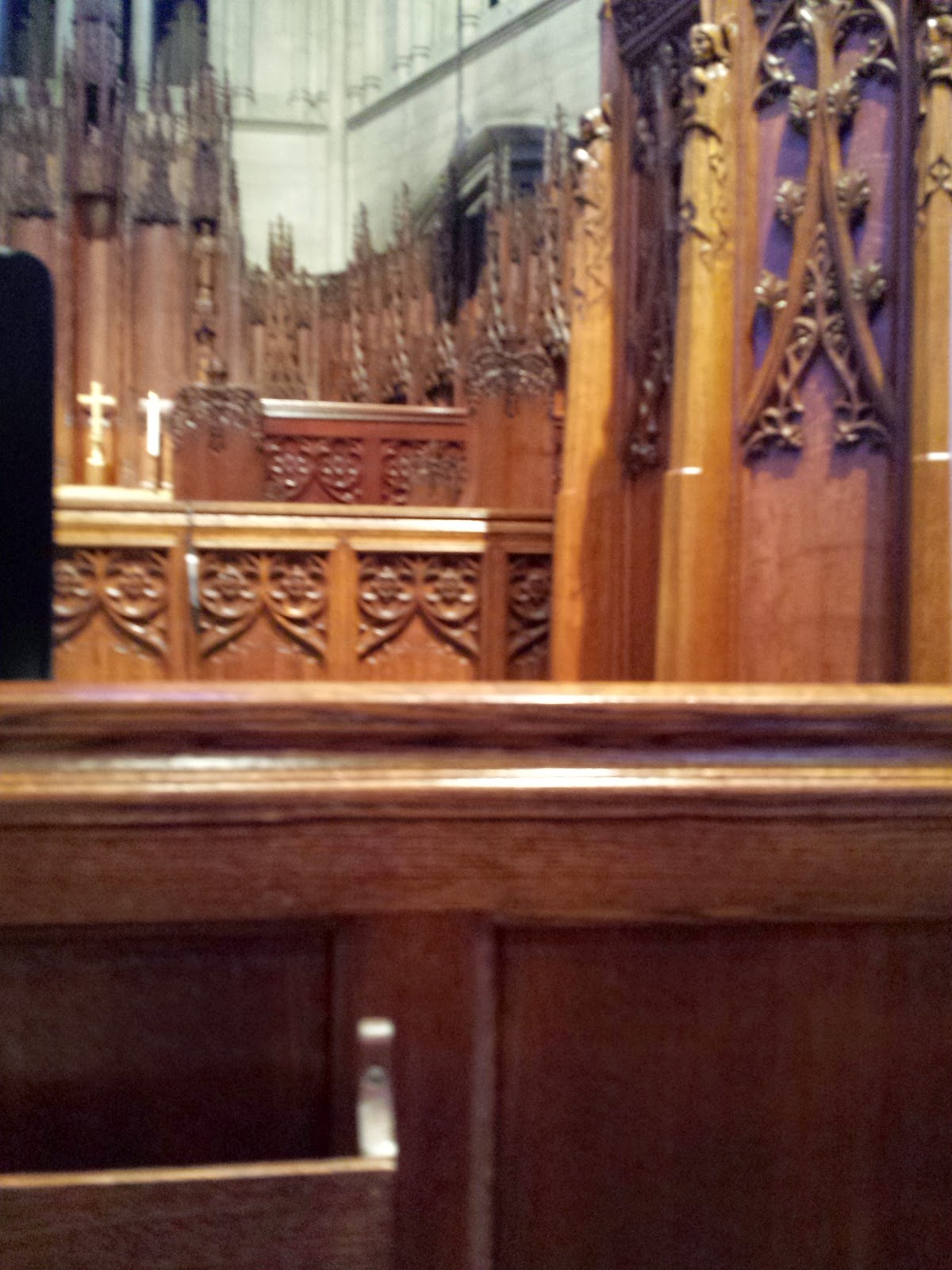 Maybe we should set more youngsters, heck why not everyone, loose with cameras during worship to see what they are seeing. What holds their attention? Are there obstacles, both literal and figurative, in their way? Of course some of these things are natural for a four-year old. Not everything will be overcome. And we would hope that as they age they begin to participate more fully. We cannot make worship appeal only to four-year olds. We do not need a lowest common denominator worship. But it cannot hurt to ponder occasionally how everyone perceives our worship... Four-year olds included.

A couple of weeks ago I had a meeting in California for campus ministry that demanded a great deal of focus and attention, which of course, between that and the travel with short turn around, let me drained. So I was looking forward to the return trip where I could become anonymous and delve into the page of notes I had made for my upcoming sermon.

Because of the demands of the meeting, I had failed to check-in online exactly twenty-four hours to the flight so I was dealt a lousy boarding number. While I had managed to score a window seat on the flight out, I knew I wouldn't even get an aisle seat. I was going to be stuck in the middle.

My strategy then was simply to grab the first available center seat I came upon on on the side of the plane that would be facing north during the flight, since the north side would not have the sun shining on it. That side of the plane is cooler, at least in my mind. As I walked back the aisle, I saw my target, dropped my laptop bag in it so I could work, and stowed my shoulder bag. And then I discovered to my horror, that the guy I would be sitting next was a guy who had been loudly talking with another guy at the gate about their Italian heritage. Everyone can recognize an evangelist, whether religious or not. This guy was an Italian evangelist. His identity was thoroughly steeped in the history and culture of Italy and he was happy to talk to anyone about it. And I dreaded this.

In the Parish -- Sermons and other reflections